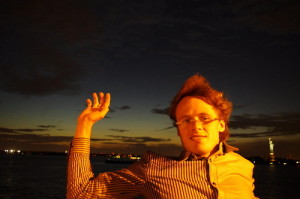 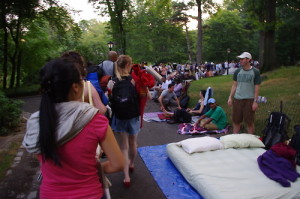 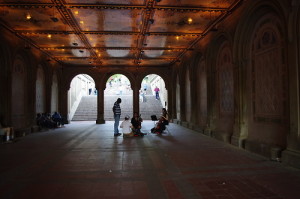 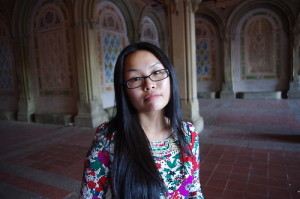 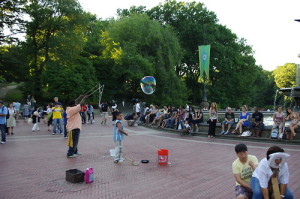 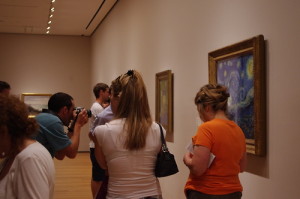 Why do I love New York, why I love New York. A crowd is always gathered around Starry Night. Museum admission asks what you can afford—and with a UN badge is no cost. The sun and shade in Central Park as people gather to watch everyone and no one, wrapped around a fountain and here and there. The faded glamor found in a tunnel with musicians performing for you, and they would perform if you weren’t there too. Building after building but they are second to the street scene below them; you may bump into anyone and speak to him or her and they will not ignore you.

Hundreds line the entrance to Shakespeare in the Park. Tickets are free and distributed two per person, at the Delacorte Theater in Central Park at noon the day of the show. The crowd lined up in the early night the day before and by the time we arrived around 2 a.m. we were several hundred from the front and throughout the night a hundred came behind. Some came prepared with tents and blow up beds; we slept on a park bench. Morning opened the park and the line in orderly fashion reassembled itself inside where many found a grassy place to nap. By the afternoon and fewer than a dozen from the ticket counter it was announced: all gone!

All was not lost though. Scott was lucky in the Virtual Ticketing lottery through the website. It was a crap shot but it worked for The Winter’s Tale and the summer sun set in the trees behind the stage.

And then there was this: a joint venture with the New York Philharmonic and the Shanghai Symphony Orchestra and a night perfectly summed up in the New York Times. Just as the conductor struck the final note of Bolero the rain came crashing down. We cut across the park and got on a 5th Avenue bus.

In the final picture, the Staten Island ferry takes commuters across the bay but it’s also a not-so-secret secret for visitors soak in views of the Statue of Liberty, in the late evening one way and night fall on the return. Lady Liberty welcomes you home, wherever you came from and whoever you are. Nobody may know you, but sometimes in the crowd you find yourself and recognize your humanity.