“Migration of Pacific Islanders to Oregon: Assessing Quality of Life Facilitators and Inhibitors”

Migration is increasing from Pacific Islands to mainland United States for several factors including education, jobs, family, and health. Though climate change is not (yet) a primary driver of emigration, it is often cited as a reason to not return to the islands. This migration often happens quite quickly, with little planning, and the transition to a new way of life may not occur as seamlessly as hoped.

We shared lessons learned from Pacific Islanders in the United States, and how the concept of Migration with Dignity can be built with this shared knowledge. 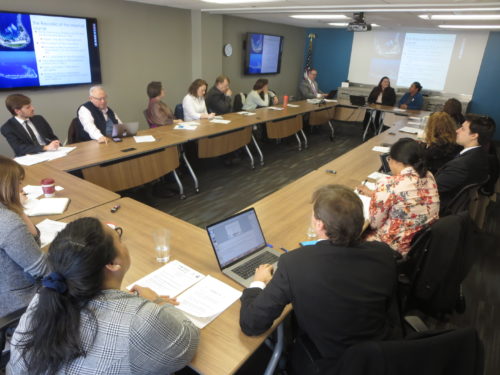 “A Portrait of Migration: Experiences of First-Generation Chuukese, Marshallese, and Palauans in Oregon”

In both Portland and Salem, we shared results of research studies that seek to better understand the motivations and experiences of Micronesians who emigrate and establish new lives abroad. Special attention was given to research results of first-generation Chuukese, Marshallese, and Palauans who have emigrated to Oregon. Community members including some of those we interviewed discussed the study results, implications, and facilitators and barriers for improved lives. 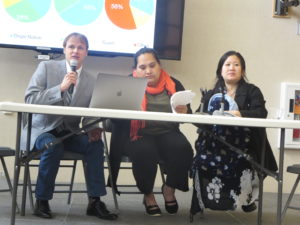 “Migration with Dignity: A Case Study on the Livelihood Transition of Micronesians to Portland and Salem, Oregon“

In this international seminar “Aspirations and Livelihood Transition of Migrants from the Pacific to Abroad” at the Imin International Conference Center, East-West Center, we discussed findings from surveys on the issue of so-called Climate Refugees from SIDS. Emphasis was placed on (a) education and training before migration and (b) livelihood re-establishment after migration.

Following the seminar was an experts meeting on “How Religion, Culture and Education Influence the Perception of People about Climate Change.” The events were organized by the Department of International Studies, The University of Tokyo; the Environmental Law Institute; Faculty of Sustainability Studies, Hosei University; and the Ocean Policy Research Institute. 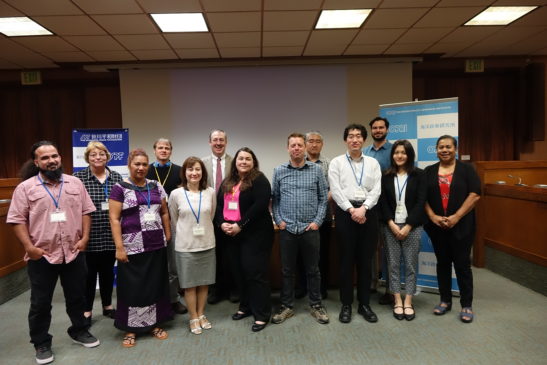 In 2005, only 7.7% of adults resided in cell phone-only households. By 2010, this figure increased to 23.9%. Thus, telephone surveys that dial only landline numbers will suffer from coverage error, error introduced into a survey when not all population elements have a chance to be selected for the sample. Many telephone surveys now incorporate cell phone numbers in their sampling scheme but, for cost and operational reasons, many surveys do not dial cell phone numbers. An understanding of the differences between adults who reside in cell phone-only (CPO) households and adults who reside in households with landlines is necessary so that appropriate weighting factors can be introduced to “correct” the bias of calling only landlines. In examining these differences,  we look at variables related to geography, age, education, race/ethnicity, mobility, housing, family structure, household income, political party, and others.  The percentage of CPO households is considerably lower in the Northeast and is most strongly positively related to mobility and negatively related to income and age.  The analysis shows that income, age, and living in a different residence one year ago explains 56.7% of the variation in CPO by state. An examination of the residuals from this regression shows that two states were vastly over predicted: Montana and South Dakota. Eliminating these states, the regression explains 68.9%. Interestingly, the percentage of a state’s area covered by cell phone companies (a supply variable) is unrelated to the percentage of CPO households.

As a member of the Florida Society of Geographers I presented my work on the promotion of stadiums and their socio-economic and demographic effects at various scales at the annual conference. Spatial-statistical analysis and ArcGIS were incorporated to address concerns over developers’ and politicians’ promises of neighborhood revitalization, assessing socio-economic effects spatially and temporally, and how prevailing ideas in the sport tourism literature are both affirmed and challenged by stadium development.

This presentation investigates the effects of a professional sports venue on the local neighborhood in Miami-Dade County. The County provides an interesting case study with a variety of stadiums and arenas with varying degrees of synergy with the local neighborhood. This analysis focuses on one venue in particular: Sun Life Stadium, a multi-functional stadium located in the northern suburbs and opened in 1987. To conduct the investigation, the following questions are asked: 1) Where is the sports arena located? 2) What are the socio-economic effects of the stadium on the surrounding neighborhood over time? Addressing the first question reveals if locational patterns exist. Factors of population, race, income, and housing value will be explored.  The second question addresses concerns about who gains and who loses from developing the stadium and how it has affected the surrounding neighborhood, both long-term and short-term. 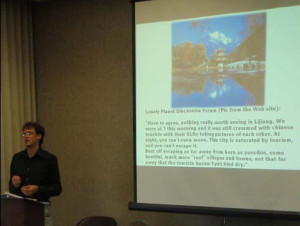 -University of Miami Geo-jottings and perspectives_2010