The Smithsonian National Zoo opened its American Bison exhibit on Saturday, August 30 with two specimens: Zora and Wilma. Zora is named in honor of Howard University alumnus Zora Neale Hurston (author of Their Eyes Were Watching God) and Wilma is named in honor of Gallaudet University alumnus Wilma Newhoudt-Druchen, the first deaf woman elected to South Africa’s parliament. The bison serves as the mascot for both universities and was the catalyst to establish the zoo in 1889 due to their decimated population.

For the bison, conservation efforts were a remarkable success as their population now numbers half a million (at one time, it numbered 375). Around the turn of the twenty-first century, I traveled through the West on a road trip with high school friends, where we encountered a bison herd stretching to the horizon. Earlier on a 1997 on a trip to Yellowstone with my father bison surrounded our car, eventually letting us pass.

Wilma and Zora, brought from the 300,000 acre American Prairie Reserve in Montana, are a testament to conservation efforts and iconic for the National Zoo. The exhibit is pleasant for visitors though I cannot help but feel sympathy for these two. For these bison who once roamed free, human nomenclature and education mean nothing. They do not know their names or their new purpose. In the ideal, no animal needs be confined to a zoo environment subjected to simulation and the human gaze. 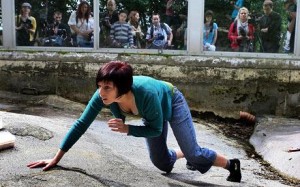