It was a peripatetic excursion with Park Ranger Steve Phan touring Fort Davis and Fort DuPont, colored by airborn flakes, snowy leaves, thorny bushes. It was the District’s first snow of the year and my first fort tour. Under the National Park Service, the Civil War Defenses of Washington program brings attention to the pearl necklace of Civil War forts surrounding the Capital City, 19 of which are managed today. At Fort Davis we discovered the location of a well, now a cavity in the earth. At Fort DuPont the magazines and hexagonal walls are so clearly manmade. While trees and the passage of time have altered the forts’ appearance some, inattention has served to preserve the earthen fortifications remarkably intact. A few ‘social paths’ and empty bottles reveal more recent human activity. In flashing moments, though, I could imagine another time in place. On April 9, 1865 General Lee surrendered his Northern Virginia Army at Appomattox Court House and in rousing, no-doubt juiced, jubilee Union troops fired heavy mortars from one fort to another for hours after four bloody years.

“On forested hills surrounding the nation’s capital are the remnants of a complex system of Civil War fortifications. Built by Union forces, these strategic buttresses transformed the young capital into one of the world’s most fortified cities.” 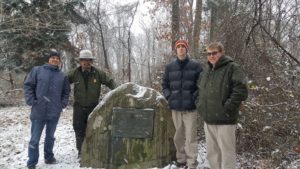 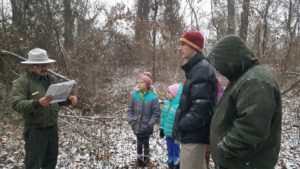