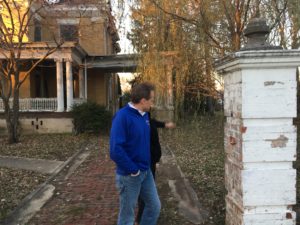 During Thanksgiving my brother, mom and I traveled from Chicago to Hoopeston, IL where my grandpa grew up. The outstanding house in town is still called the “Dyer Mansion” on Honeywell St. and was owned by my great-great grandpa (not by blood), James H. Dyer, who was elected City Attorney in April 1879 and mayor from 1893-1895 and served as Vice President of the Hoopeston National Bank, and by my grandpa’s uncle, Charles Furness Dyer, also selected as City Attorney, junior member of the law firm Dyer & Dyer from 1913-1925. A History of Hoopeston document reports

When the World War broke out City Attorney Charles F. Dyer immediately placed himself at the disposal of his country’s military forces, was com- missioned and sent overseas. In 1919 with his company still in France, Captain Dyer was elected to the post of City Attorney without opposition, those who were at home feeling it an honor to so reward one of their “fighting sons.”

Along with the rest of the town, it has fallen into disrepair. Then the house burned. news report 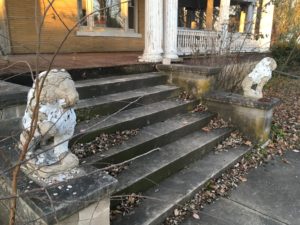 Lions, chipped to their shadows, still guard the steps. 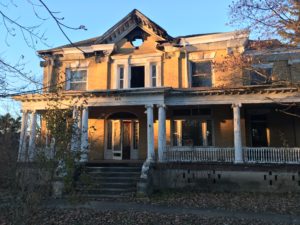 The house, once visited by Clarence Darrow, is stately and decayed. It reminded me of Faulkner’s story “A Rose for Emily” in which a decayed mansion symbolized a bygone era. Old family photos show the pond, rod-iron fencing, and pillars surrounding the property. 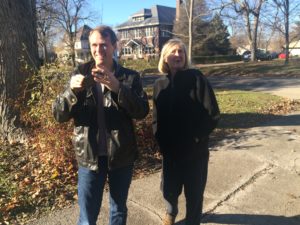 Mark and my mom assessing the damage and the old mansion. My mom had only a few memories of the house as it was owned by her dad’s uncle in her childhood. 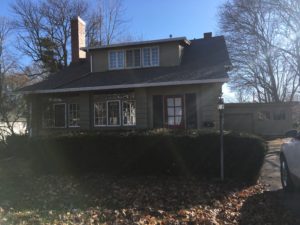 The home on East Penn St. which still dead-ends into a farmer’s field is where my mom occasionally visited with her parents. The house was owned by Lucian B. Dyer and Frieda (Willett) Dyer (formerly married to Malcolme “Peter” Decker). This is the type of town that you just drive and find–no need for a map. We drove passed the house first, then traced back and Mom spotted it. We peered in the windows–everything under repair. Struck up a conversation with the neighbor who called the current owners. Mom left a message on their voicemail that no doubt would intrigue them, as she knew the history of their home. In five minutes the owners pulled in the drive and pleasantly gave us a tour–or rather, Mom gave them a tour. 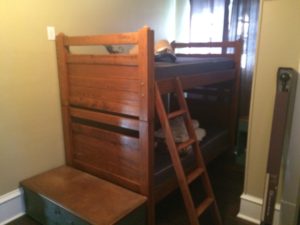 My grandpa’s old bedroom. He would have slept here until marrying my grandma and enlisting in the service. The bunkbed set (newer) is the same model as in my childhood bedroom. 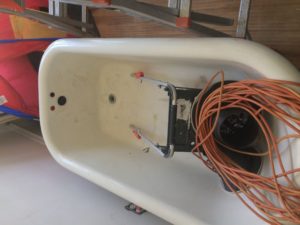 This original-to-the-house 1920s tub would have been used by my grandpa as a boy. It will have new life for the new owners.