As a member of the Florida Society of Geographers I presented my work on the promotion of stadiums and their socio-economic and demographic effects at various scales at the annual conference.

Spatial-statistical analysis and ArcGIS were incorporated to address concerns over developers’ and politicians’ promises of neighborhood revitalization, assessing socio-economic effects spatially and temporally, and how prevailing ideas in the sport tourism literature are both affirmed and challenged by stadium development.

To conduct the investigation, the following questions are asked:

1) Where is the sports arena located?

2) What are the socio-economic effects of the stadium on the surrounding neighborhood over time? 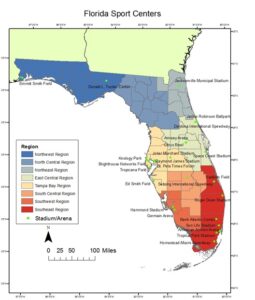 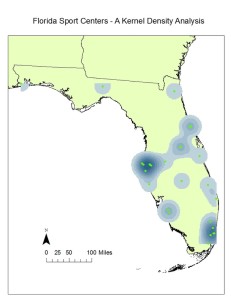 To assess changes following the building of the stadium (now called Hard Rock Stadium), I analyzed Census tracts at different time periods and distances. Drastic changes occurred in the years before and after the stadium was built, even when compared to the region. For instance, the white population decreased by 92% while housing prices nearest to the stadium increased more than those farther away.

Comparisons were made with other sports venues in the area. Footprints with a 800 meter radius show the associated businesses.