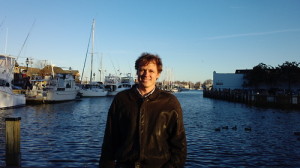 Annapolis day trip with Grace—picked her up near Dupont Circle, then to New York Avenue, highway 50 due east. From the previous time I visited before Christmas, I knew to park in the visitor center. We visited the state capitol, the oldest one still in legislative use. The Continental Congress met here, Washington retired from his political life in the senate room, and Thomas Jefferson visited the now-closed interior of the dome for a bird’s eye view of the town.

We made our way past giant chicken sculptures, the stately St. John’s College campus, and to a sushi restaurant on Main Street. Outside at the harbor was a group of young musicians entertaining the crowd. This is a “leisure town” Grace remarked, which is true. Reflecting, much of my life has been spent in leisure places like this.

The Naval Academy is next to the harbor and my Hawaii ID barely made it through; outside Hawaii, it often gets a second look. Unlike the other service academies, visitors can freely walk around the grounds. At the visitor center, the guide suggested we take photos of everything except the guards, “who may shoot back.” We made it to the chapel just before closing and the museum with an exhibit on Pearl Harbor.The students were dressed in uniform, some carrying bags of laundry to be done at home, some hopping in their family’s cars for a dinner out. “It is the students who make the place special.” Grace was right: the traditions live on with each successive class and that continuity across the generations not only gives affords its traditions but its vitality.

I missed my haircut at Capistrano Barbershop (my reason for going to Annapolis), but got a whiff of Kilwins from the doorway and a coffee to go at City Dock. I grew up about a hundred yards from the original Kilwin’s in Petoskey, Michigan, another leisure town much like Annapolis. Now their franchises are found across the nation, primarily in leisure towns in Michigan and on the eastern coast.

Today was an early glimpse of spring, the first real spring I’ve experienced in twelve years.